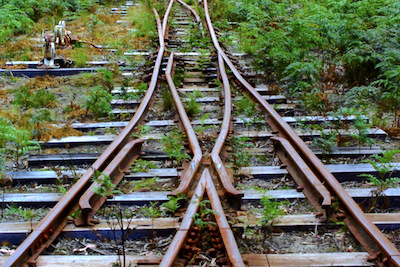 We become what we behold. We shape our tools, and thereafter our tools shape us.

Add the following line to your leiningen dependencies:

Require tracks in your namespace header:

This is a library dedicated to the concept of shape.

It's common to grapple with large maps whose shapes are uncomfortable to reason about.

tracks simplifies transformations and destructuring of Clojure datastructures. Instead of describing how to do a transformation, tracks allows the user to create those transformations by example. This makes writing complex code that takes one shape and transforms them to another dead simple.

Destructuring complex nested data structures can be a real pain. Tracks makes this easy. Much like clojure.core/let, symbols in the track pattern will be bound to the value and available the body. Unlike clojure.core/let we supply a binding form of the same shape as the data we are interested in.

track returns a function which takes data of the shape of its first argument.

Below, the function returned by track will take a map with keys :a and :b and move the value at :a to :b, and the value at :b to :a:

deftrack does the same thing, but binds it too:

We can move positions in vectors and deeply nested maps in exactly the same way:

Deep thinking about deeply nested shapes is a bygone era:

Let's simulate a game where there's an active player, and all other players wait in line to become the active one. Once a player has played their turn, they go to the back of the line.

Like a train track, sometimes one track can split into many. With track the values can be duplicated.

We see it moves any value from keypath [:x] to keypath [:y].

The way it does it is by moving {:x one} into a let like so:

Distributed under the Eclipse Public License either version 1.0 or (at your option) any later version.